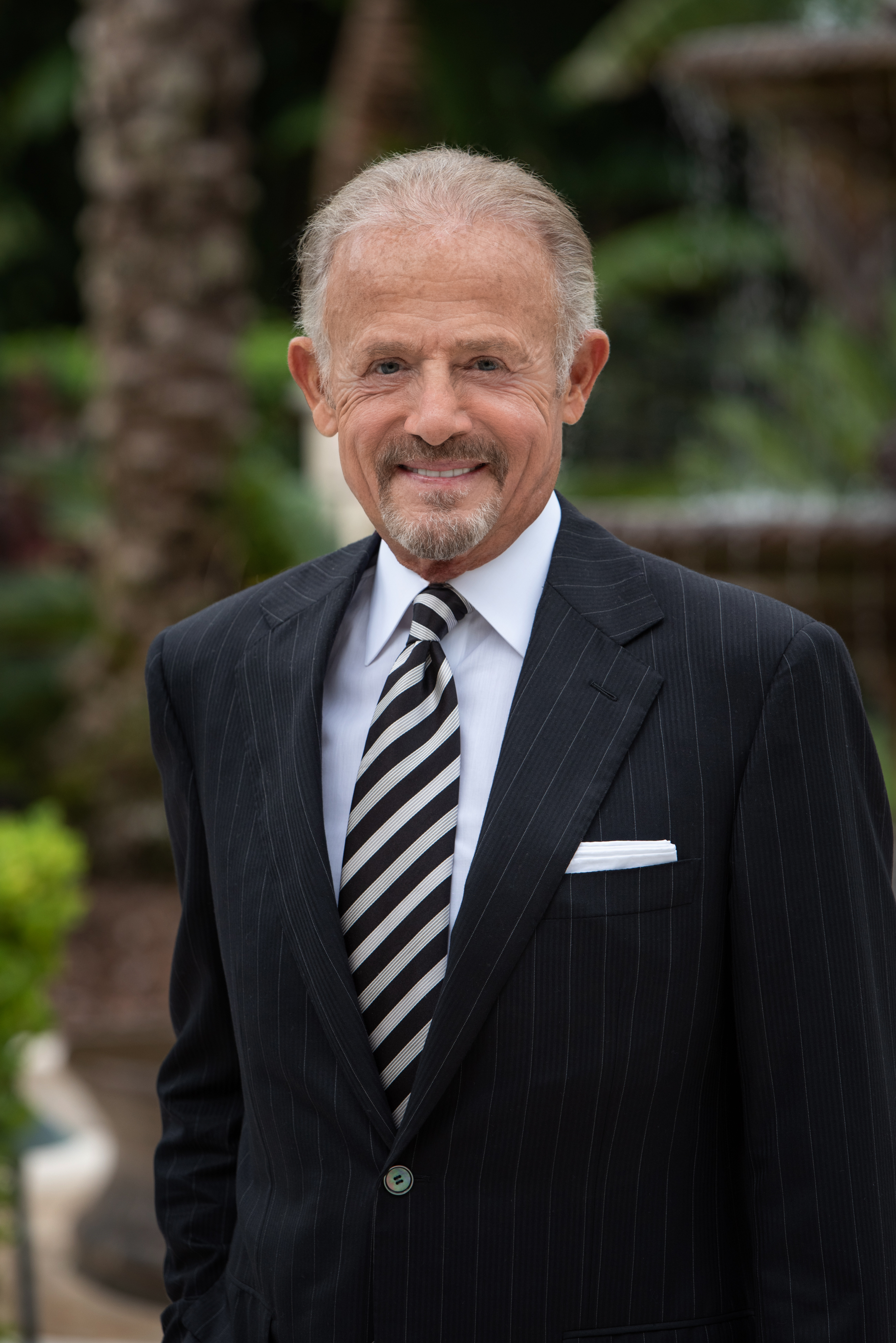 Steve Yerrid has been repeatedly acknowledged as one of America’s top trial lawyers.  His career accomplishments demonstrate an unwavering commitment to justice and the people it serves.

In 1980, he received international recognition in one of the world’s largest maritime tragedies.  Successfully using an “Act of God” defense, he obtained the complete exoneration of Captain John Lerro, the accused pilot in command of a large bulk freighter when, during a hurricane-like storm, it struck the mammoth Sunshine Skyway Bridge destroying its center span and killing 35 people.

In the 1990’s, Mr. Yerrid was appointed by the late Governor Lawton Chiles and as the youngest member of an eleven member “Dream Team” of private lawyers, undertook a leading role in Florida’s landmark lawsuit against the previously unbeaten cigarette industry.  The case resulted in the biggest monetary settlement in U.S. history, ultimately topping $17 billion.  In addition, he and the members of Florida’s “Dream Team” succeeded in obtaining unprecedented advertising concessions that permanently prevented marketing aimed at children, eliminated cigarette billboards, vending machines, Joe Camel, the Marlboro Man, and established youth tobacco prevention programs across the United States.

Mr. Yerrid has experienced a career of noteworthy achievements, including over 300 verdicts and settlements of $1 million or more.  Among those was a jury verdict of $217 million, the largest medical malpractice award in Florida’s history, and the nation’s largest malpractice verdict in 2006.  In 2009, he again obtained the country’s largest verdict rendered in a wrongful death case that year with a jury award of $330 million.

Mr. Yerrid is a past recipient of the Perry Nichols Award in recognition of a lifetime of outstanding and distinguished service in the pursuit of justice.  It is the highest honor bestowed by The Florida Justice Association.  He currently serves on the Board of Governors as a Fellow of The Academy of Florida Trial Lawyers, an entity created in the image of the AFTL Founders to honor those who have demonstrated a vision and passion for Florida’s civil justice system.  He has been honored as a recipient of the Crystal EAGLE Award for lifetime achievement from the FJA, as well as numerous Gold and Silver EAGLE Awards over the years.  In 2013, he was presented with the Excalibur Award in recognition of giving more than $500,000 to the FJA and its educational organizations.  In 2018, Mr. Yerrid received the Golden Talon Award in recognition of the first donor to achieve the $1,000,000 level of giving to the FJA.  Mr. Yerrid has been selected as Top Lawyer in the Nation by Lawyers USA.  He has been listed as one of the Top Ten Litigators in Florida by the National Law Journal. He has received the Outstanding Lawyer of the Year in Florida’s Thirteenth Circuit.  He has been recognized as Trial Lawyer of the Year by the American Board of Trial Advocates (“ABOTA”), Tampa Chapter, and honored nationally by that organization as a Diplomat. He has been a Florida Bar Board Certified Civil Trial Lawyer and certified as a Civil Trial Advocate by the National Board of Trial Advocacy since the inception of the board certification programs over thirty years ago.  He was appointed by Presidents of The Florida Bar as Chairman of the Florida Bar’s Civil Trial Board Certification Committee, as well as Chairman of the Admiralty Section.  In 2016, Mr. Yerrid was voted and included into the Hall of Fame of the National Trial Lawyers Association, the highest accolade a trial lawyer can receive from that organization.  Mr. Yerrid is also a member of the New York State Trial Lawyers Association and the Texas Trial Lawyers Association.

Mr. Yerrid is a lifetime member of the prestigious Inner Circle of Advocates, an "invitation only" organization, consisting of the best 100 plaintiffs trial lawyers across the nation.  He received the Champion of Justice Award bestowed by the TBTLA, in recognition of his philanthropic activities and outstanding results in the courtroom that benefited all of society.  He has achieved the rank of Diplomat (over 50 jury trials) in the American Board of Trial Advocates, and has been a Sustaining Member of the American Association for Justice for almost the entirety of his career.

Additionally, Mr. Yerrid was honored to be appointed and act as Special Counsel to the Office of the Chief Judge (13th Judicial Circuit) and the Florida Conference of Circuit Judges.  Representing Florida’s entire judiciary, he successfully argued before the Florida Supreme Court for the protection from public disclosure of confidential records and internal communications within the court system.

In 2010, confronted by the nation’s largest environmental catastrophe in its history, Governor Charlie Crist appointed Mr. Yerrid as Special Counsel to the Governor regarding the Deepwater Horizon oil spill disaster and its aftermath.  In rendering his time, costs, and efforts for nearly a year, he provided his service to the people of Florida pro bono and personally paid the entirety of the associated costs involved with the representation.  As a result, Florida’s trial lawyers presented Mr. Yerrid with the Outstanding Pro Bono Award, special recognition given only every several years by the trial bar.  Most recently, he was retained by the City of Tampa and recently settled with BP in the amount of $27.5 million for the economic damages stemming from the disaster, the largest amount paid to any city by BP.

Over the past four decades, Mr. Yerrid has been selected and continuously included in the publication Best Lawyers in America, included in Top Lawyers, Who's Who in American Law, Who's Who in the World, continuously included as one of the best 500 lawyers in the nation in LawDragon, Superlawyers, and listed in Law & Leading Attorneys. Two of his final arguments have been included in the audio cassette production entitled The AFTL Masters Series consisting of the twenty-four best million-dollar final arguments of Florida's trial lawyers.  In 2013, he and The Yerrid Law Firm were featured in Tampa’s Top Rated Lawyers by Martindale-Hubbell, and also featured in Best Lawyers in America.  Again in 2015, Mr. Yerrid and the firm were highlighted as the cover story in Best Lawyers.  Further, in 2015, The Yerrid Law firm was included as an honoree in the National Law Journal’s Elite Trial Lawyers, and, Mr. Yerrid was inducted into Florida Trend’s Hall of Fame.

He was honored to serve as Special Counsel to the President, United Way of America, at the international headquarters in Washington, D.C., and participated pro bono in a $3 billion worldwide fundraising effort, as well as the launching of several national and international programs that remain in use today.  Additionally, Mr. Yerrid has served as a Patron and is past Chairman of the Gentlemen's Committee of The Children's Home, one of Tampa's leading charitable organizations dedicated to abused and neglected children. He is proud to be the second recipient of the Ted Williams Award for Champions of Charity, an honor personally bestowed by the late Mr. Williams himself on behalf of the Pediatric Cancer Foundation in recognizing his exceptional commitment to suffering children. He is a lifetime honorary board member of the Children’s Cancer Center and is a past recipient of the Golden Kite Award, the organization’s highest honor and given for outstanding support and assistance of children stricken with cancer and their families. He is an avid supporter of pediatric cancer research and sits as a lifetime member on the Board of the National Pediatric Cancer Foundation.  He is the past recipient of that organization’s highest honor, The Spirit of Hope Award.  He and The Yerrid Foundation have also been recognized with its Community Partner of the Year Award.  Mr. Yerrid is an honorary member of the board of the 1Voice Foundation, which supports pediatric cancer research, as well as providing care for families and children battling the disease.  Mr. Yerrid serves as an honorary member on the Board of Advisors of A Kid’s Place of Tampa Bay, an organization dedicated to the betterment of foster children.  In 2014, Mr. Yerrid received The Tampa Bay Lightning Community Hero Award.

In 2012, Mr. Yerrid was honored in Washington, D.C. as its “American-Lebanese Man of the Year” by the American Foundation for Saint George Children’s Hospital located in Beirut, Lebanon for his financial support in assisting critical care of children in that region and making a difference in their lives.  He has been a member of The Cousteau Society since 1977, an international organization dedicated to protecting the world’s marine resources.  He was appointed and served as Chairman of the non-profit task force organized to promote Americas' Boxing Qualifier, a qualifying event in which 160 athletes from over 20 countries competed for a place in the 2000 Olympic Games.  In 2011, Mr. Yerrid was honored to be voted into the Florida Boxing Hall of Fame based upon his background as an undefeated amateur boxer, a successful promoter, an avid supporter of the “fight game”, protecting its integrity and helping former boxers who have been injured or fallen on hard times.  He promoted two light-heavyweight championship fights featuring Florida’s Roy Jones, Jr. (internationally televised on HBO) that drew the largest and second largest attendance at any boxing event in Florida’s history.  In both instances, Mr. Yerrid donated the entirety of his promoter’s fees to charitable organizations supporting cancer research.

Mr. Yerrid believes strongly the legal profession should always seek to better itself through continuing education, and he frequently appears as a speaker to groups around Florida and across the nation.  In the past, he taught as an adjunct professor at Stetson Law School, and continues to teach annually as a visiting adjunct professor at his alma mater, Georgetown University Law Center.  Mr. Yerrid remains extremely active in philanthropic activities, community service, and in the legal profession.  As a trial lawyer, he greatly values the opportunity to represent those seeking justice, as well as helping others in need.