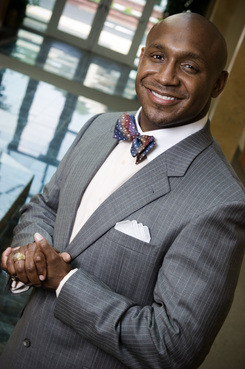 Mawuli Mel Davis is a founding partner of the Davis Bozeman Law Firm where he leads the firm’s Civil Rights Division. Attorney Davis attended the United States Naval Academy in Annapolis, where he played varsity basketball and earned a Bachelor’s Degree in Political Science. Attorney Davis served in the United States Navy as an officer for nearly ten years. He earned a Masters Degree in Public Administration from Bowie State University while on active duty in Rota, Spain. Attorney Davis is a graduate of Georgia State University(GSU) College of Law.

Attorney Davis was acknowledged in the Atlanta Magazine as both a Rising Super Lawyer and later as a Super Lawyer, distinctions given to less than 3% of the lawyers practicing in Georgia. Attorney Davis was named the Civil Rights Attorney of the Year by the Gate City Bar Association, the Advocate of the year by the ACLU of Georgia, Civil Rights Legal Champion by the Urban League of Greater Atlanta, and was inaugural recipient of the Southern Center for Human Rights' Luminary Award. Most recently he was named as one of Georgia's Legal Elite by Georgia Trend Magazine.

Attorney Davis has been involved in the representation of public figures, entertainers, athletes, including being a member of the appeals team for former Mayor of Atlanta, Bill Campbell. Attorney Davis and firm co-founder, Robert Bozeman were featured as successful entrepreneurs in Black Enterprise magazine. The Davis Bozeman Law Firm was highlighted on the cover of the Atlanta Daily World as the "Legal Guardian's of Atlanta's Black Community" and awarded the Self-Determination Award by the Malcolm X Grassroots Movement and the African Community Center for Unity and Self-Determination. Their courtroom victories range from winning a civil verdict against an NFL player to obtaining not guilty verdicts in murder trials. Attorney Davis has had cases covered by a wide array of media outlets across the country including: the Tom Joyner Morning Show, Atlanta Journal Constitution, USA Today, New York Times, NPR Radio, CNN, TMZ, Time Magazine and Worldstarhiphop. Attorney Davis' diverse television appearances range from serving as a guest commentator on The Situation Room with Wolf Blitzer on CNN to representing recording artist Lil’ Scrappy on VH-1’s Love & Hip Hop Atlanta.

Attorney Davis’ organizing efforts have included working with gang members in Chicago to participating in the United Nations World Conference Against Racism in South Africa. Attorney Davis recently served as an international legal observer for the Haitian Presidential Elections. Attorney Davis developed and presents a multimedia presentation to teens entitled, “The Consequences of Thug Life”. Attorney Davis along with his wife, educator and activist, Jana Johnson-Davis, also developed "If You Can See, it You Can Be It", to introduce the legal profession to middle school students. As a result of his many community endeavors, Attorney Davis is considered an “Activist Attorney” and was named Humanitarian of the Year by the Atlanta Chapter of the NAACP, Kappa Alpha Sigma Chapter of Phi Beta Sigma and most recently by the Atlanta Alumni Chapter of Kappa Alpha Psi Fraternity, Inc. Additionally, he has represented and helped organize legal support for activists engaged in protests including the Occupy Movement, Moral Monday, and Black Lives Matter. As a result of his pro bono representation in social justice movements he has been affectionately dubbed the “Liberation Lawyer”.

As an activist, Attorney Davis is a co-founder of Let Us Make Man. After the acquittal of George Zimmerman, he was one of the primary organizers for the march of over 5,000 protestors from the Atlanta University Center to CNN Headquarters. A photograph of this historic "Respect Black Life" march was featured in Ebony magazine.

Attorney Davis was awarded Father of the Year in by Jack & Jill Inc. of Atlanta, Mentor of the Year by the Atlanta Alumni Association of Morehouse College and Father of Distinction by the Concerned Black Clergy. The DeKalb Lawyers Association (DLA) named the “Mawuli Davis Legal Warrior Award” in his honor. Attorney Davis is also recently became co-chair of the newly formed Beacon Hill Black Alliance for Human Rights. He is a proud member of the Kappa Alpha Psi Fraternity Inc. and the DeKalb Chapter of the 100 Black Men of America. Attorney Davis serves on the boards of the Southern Center for Human Rights, Kilombo Cultural and Educational Institute , Walter Rodney Foundation, and the Decatur Family YMCA. Attorney Davis has been married to his wife, Jana Johnson-Davis, for 23 years and they have two sons, Kobie and Khari.