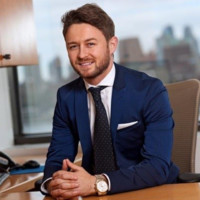 Darren Moore is the owner of the Law Offices of Darren T. Moore PC. Darren is a skilled, meticulous and tenacious personal injury attorney who has litigated cases throughout the courts of New York. He is admitted to the State Courts of New York, the Eastern District of New York Federal Court and the Southern District of New York Federal Court. He is a member of the New York State Trial Lawyers Association (NYSTLA), New York State Bar Association (NYSBA), New York Academy of Trial Lawyers and American Association for Justice (AAJ) among other legal and professional groups.
Education and Accomplishments
Born and raised in Ireland, Darren’s dream from the earliest age was to become a lawyer. After graduating from high school and law school in Ireland, Darren came to the US to sit for the New York Bar Exam at the age of 22, one of the youngest examinees to ever sit and pass the exam. After successfully passing the exam, Darren made the decision to relocate permanently to New York.

Upon arrival in New York, Darren began his legal career working with a litigation firm based on the 77th floor of the iconic Empire State Building. It was there that Darren honed his legal writing skills and also obtained invaluable experience throughout the Courts of the State of New York. It was also there that Darren began dealing with personal injury cases for the first time and realized that he had found his passion in “representing those who can’t represent or fight for themselves.”

He remarks “One of my first injury cases was an undocumented Irish construction worker who suffered a serious leg injury on a job site. Just been able to help him navigate and get through the legal process was so gratifying. Then, to be able to fight for him against the Defendant’s in court and ultimately get him the just compensation he deserved, compensation I must add that helped compensate him for his injuries, for what he had missed out on and compensate him for the rest of his life was one of the most satisfying things I had ever done and genuinely, from there, I knew this was my calling.”

After a number of years’ in midtown Manhattan, Darren obtained a job with one of the top New York personal injury firm’s and spent seven years at that firm. There, he focused his practice on construction accidents’, motor vehicle accidents’, slip and falls’, trip and fall accidents’ and premises liability accidents’. Darren worked under and alongside some of New York’s best attorney’s and gained invaluable experience. During his tenure, Darren spent nearly every day in the Courts of New York and the outer boroughs and counties, arguing motions, attending conferences and trying case’s before juries when necessary as well as utilizing his negotiation skills both inside and outside of the courtroom to settle personal injury cases’ and obtain the best results for the firms’ clients.

In 2016, Mr. Moore was chosen by his peers as a ‘Rising Star’ of the New York Super Lawyers and has been chosen every year since. Each year, no more than five percent of the lawyers in the state are selected by the research team at Super Lawyers to receive this honor. Super Lawyers, a Thomson Reuters business, is a rating service of outstanding lawyers from more than 70 practice areas who have attained a high degree of peer recognition and professional achievement. The result is a credible, comprehensive and diverse listing of exceptional attorneys. For more information about Super Lawyers, visit SuperLawyers.com.

In January 2019, Darren then founded The Law Offices of Darren T. Moore P.C. As he states himself,

“At the prior firms I worked alongside and I worked under some of the very best attorneys in the field and got invaluable experience. I settled hundreds and hundreds of cases and where needed, I tried cases to verdict before judge and jury. Trying cases is something I thoroughly enjoy doing and it’s also important that Defendants and the insurance companies know that you are happy to put your case before a jury if they won’t accept responsibility and compensate your clients. With all of that experience, I knew it was time for me to set up my own firm and provide my clients going forward with the outstanding service that they deserve in the pursuit of justice for them.”

In addition to the above, Mr. Moore has also being awarded the “Clients Choice Award” from Avvo, an online marketplace for legal services, being selected as one of 10 Best Personal Injury Attorney’s in both 2018 and 2019 from the American Institute of Personal Injury Attorneys along with being selected as one of New York’s Top 10 Attorneys in 2019 from Attorney and Practice Magazine.

Aside from his legal passion, Darren is heavily involved within the Irish Community here in New York and in particular, with the Gaelic Athletic Association (GAA) based in Gaelic Park in the Bronx. An avid sports fan, Mr. Moore played soccer in the Irish Eircom U-21 league prior to his relocation to New York and upon arrival Mr. Moore represented the New York Gaelic Football team in the 2012 All Ireland Senior Football Championship. He also won a New York Senior County Football medal in 2013 for the Kerry GAA Club here in New York.

As part of his affiliation with numerous Irish organizations here in New York, Mr. Moore lead and coordinated an initiative in 2012-2013 to provide free legal assistance to families affected by the devastation of Hurricane Sandy. Mr. Moore is also involved in his local community and is a regular reader at his local church.
Focus Areas
Mr. Moore focuses his practice on construction accidents, motor vehicle accidents, truck accidents, premises liability accidents, brain injury accidents, workers compensation and medical malpractice. Mr. Moore is an attorney who relentlessly advocates in pursuit of 100% justice and full compensation on behalf of his clients. He is meticulous in his preparation and handling of each individual case and takes great pride in the service that the firm provides;

“When a client comes to my firm looking for us to represent their interests in a personal injury action, we take great pride in the trust that they are placing in us and to repay that trust, it is our goal to be compassionate to their situation and their needs but to relentlessly and aggressively pursue 100% justice for each and every client.”

Mr. Moore is admitted to practice law in the State Supreme Court of New York and the U.S. District Court for both the Southern and Eastern District of New York.