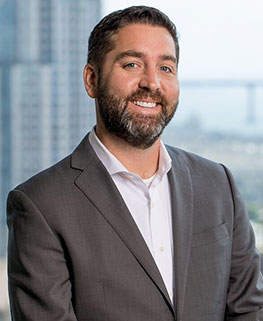 Ben is a trial attorney devoted entirely to representing individuals in a variety of legal areas including catastrophic personal injuries, employment matters, medical malpractice, business disputes and defective products. Ben believes strongly in giving consumers a voice they might not otherwise have.

Ben is the Chairperson of the firm’s Brain Injury Practice Group. He is also the sitting Vice President of the San Diego Brain Injury Foundation, where he has been a member of the Board of Directors for the last four years. Ben is regularly invited to speak to lawyers, survivors and physicians about the implications of brain injuries on survivors and their families, and how to present their cases. He is a co-author/editor of the Journey Toward Recovery: A Brain Injury Guide for Survivors.

Ben also sits on the Board of Directors of the Consumer Attorneys of San Diego and the University of San Diego School of Law Alumni Association. He is the editor of the Tort Law section of the Trial Bar News. In addition, he has been published numerous times in a variety of different legal publications.

Before pursuing a career in law, Ben spent four years in the media relations department of the San Diego Padres. He also clerked for former San Diego Padres Vice President/General Counsel Katie Pothier. Ben earned his Juris Doctorate from the University of San Diego’s School of Law and his Bachelor’s degree from Northwestern University’s Medill School of Journalism.

Ben and his wife Kathleen believe strongly in giving back to their hometown of San Diego. They regularly volunteer for a number of local San Diego not-for-profit organizations. Ben and Kathleen are lifelong fans of all San Diego sports teams – especially the San Diego Padres, where they met as coworkers in 2008.

In 2017, Ben and Kathleen were blessed with the birth of their son Jack. In their free time, they enjoy taking Jack to all of their favorite San Diego spots, and raising him, as they were, as a proud San Diegan.